The natural history of human papillomavirus (HPV)-induced cervical cancer (CC) is not directly observable, yet the age of HPV acquisition and duration of preclinical disease (dwell time) impacts the effectiveness of prevention policies (Figure 1). We performed a comparative modeling analysis utilizing the CISNET Cervical models to characterize the age of acquisition of cancer-causing HPV infections and implied dwell times for distinct phases of cervical carcinogenesis.

In the absence of screening or vaccination, the CISNET Cervical team found the median time from HPV acquisition to cancer detection ranged from 17.5-26.0 years across the four models. Three models projected that 50% of unscreened women acquired their causal HPV infection between ages 19-23 years, while one model projected these infections occurred later (age 34 years) (Figure 2). In the context of imperfect compliance with U.S. screening guidelines, the median dwell times were shorter (12-18 years) and the median age of causal infection was 4.4-15.9 years later compared with model projections in the absence of screening. These validated CISNET-cervical cancer models, which reflect uncertainty in the development of cervical cancer, elucidate important drivers of HPV vaccination and cervical cancer screening policies and emphasize the value of comparative modeling when evaluating public health policies (Burger et al., 2019).

For models that allow regression from a high-grade precancer to human papillomavirus (HPV) infection and progression back to high-grade precancer prior to progressing to invasive cancer, we assumed the time spent in each health state, regardless of sequential progression contributed to the respective dwell times. Dwell time was set to zero if a woman cleared her type-specific HPV infection and any associated lesions. aThe analysis stratified HPV-16, HPV-18, and other non-HPV-16/18 types; blncludes cervical intraepithelial neoplas (CIN) grades 2 and 3; the Harvard model allow for non-sequential progression from HPV to CIN2 or CIN3; cThe Harvard model does not include an explicit CIN1 health state. 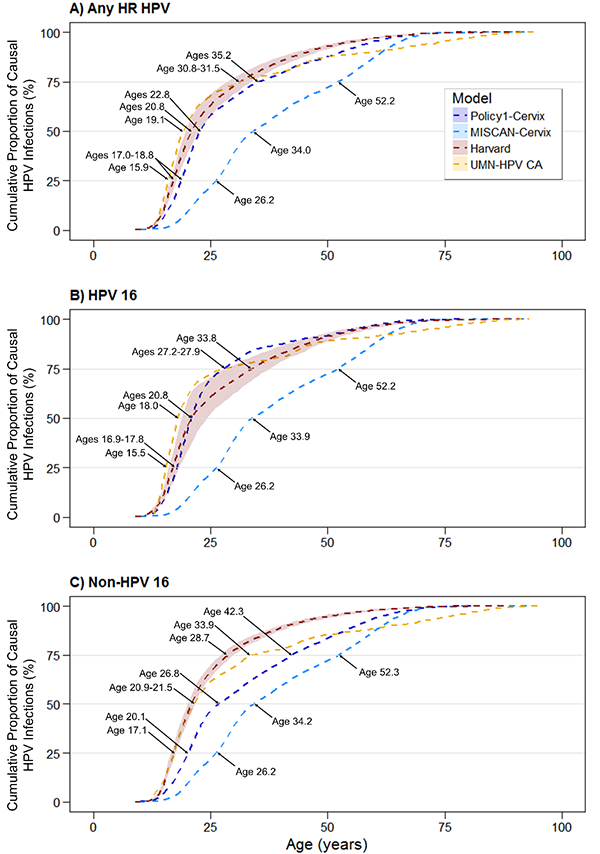 In May 2018, the World Health Organization (WHO) Director-General issued a global call to eliminate cervical cancer as a public health problem, which involves setting ambitious screening and vaccination coverage targets. The CISNET Cervical team performed a comparative modeling analysis using two of the CISNET Cervical models to assess the potential for, and timing of, cervical cancer elimination in the United States and whether this could be expedited by adopting ambitious intervention coverage targets.

Under status quo assumptions, the models projected that cervical cancer incidence would fall below 4 per 100,000 women-years between 2038 and 2046 (Figure 3). Scaling up screening coverage to 90% was the most impactful intervention in terms of expediting elimination timing (10-13 years earlier), averting an average of 1,400-2,088 additional cases per year over 2019-2100. Increasing HPV vaccination coverage to 90% or vaccinating adults aged 26-45 years had minimal impacts on cervical cancer incidence.

The USA is on track to eliminate cervical cancer as a public health problem in the next two to three decades. Time to elimination could be expedited by 10–13 years by achieving higher screening coverage. [Burger et al., 2020] 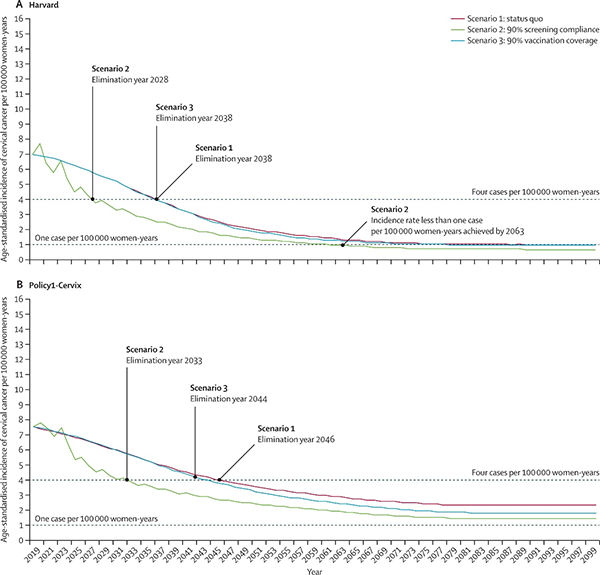