While esophageal squamous cell carcinoma (SCC) incidence has been declining in the US and other parts of the western world, esophageal adenocarcinoma (EAC) incidence has experienced an alarming five-fold increase over the past four decades. There is no consensus regarding the causes of this increase in EAC incidence, although an increasing prevalence of gastroesophageal reflux disease (GERD) related to increases in abdominal obesity and wider eradication of Helicobacter pylori infection have been suggested, among others. A 2014 joint analysis (Kong et al., 2014) used three independent mathematical models to analyze the EAC incidence and mortality rates among men and women aged 20-84 years in the US during 1975-2010. We then projected the EAC incidence and mortality rates to the year 2030. Despite the differences in mathematical formalisms among the three models, our projections suggest that the EAC incidence rate will continue to increase. Thus, improving screening and surveillance protocols for EAC continues to be a critical public health concern that needs to be addressed. 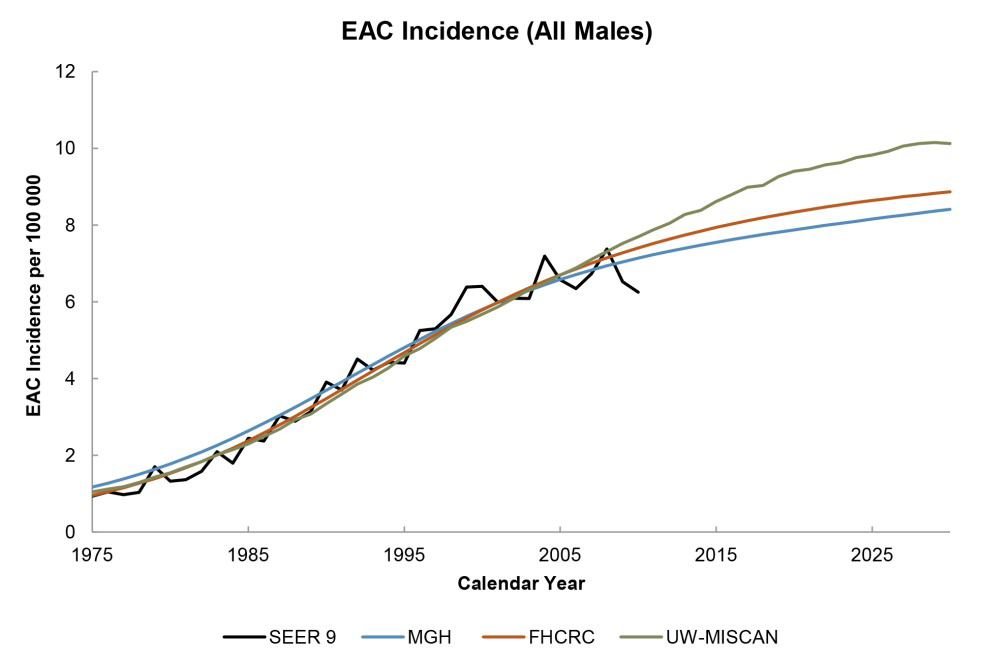 Until recently, most societal guidelines recommended regular surveillance in order to achieve early
detection of EAC after diagnosis of Barrett’s Esophagus (BE). New techniques for endoscopic ablation of BE such as radiofrequency ablation (RFA) have become more widely utilized with the aim of preventing the progression to EAC. Currently the American Gastroenterological Association (AGA) guidelines recommend endoscopic ablative therapy only for patients with at least high-grade dysplasia (HGD), since the incremental benefit for this therapy on low-grade dysplasia (LGD) and particularly non-dysplastic BE patients remains uncertain and under debate. Although a growing body of investigation has focused on the efficacy and durability of RFA treatment, the impact of its widespread utilization on population-level cancer control has not been analyzed.

In this base case analysis, we applied the three CISNET models to estimate the impact of endoscopic ablative treatment on EAC mortality. We evaluated multiple management strategies, testing various factors which could impact RFA effectiveness, such as point of intervention (as determined by initial dysplasia status) and individual patient risk characteristics such as age and gender.

The results of our comparative simulation analyses indicated that endoscopic ablative therapy for BE can be effective for cancer control. The resources needed to achieve these results are high, especially for RFA treatment of lower grade and non-dysplastic BE where diminished efficiency limits intervention.

In response to the rapid rise in EAC incidence in the US and much of the western world, the primary
cancer control measure has been to screen patients with chronic gastroesophageal reflux disease (GERD). Those identified as having BE undergo endoscopic surveillance with biopsies at regular intervals, with the goal of detecting dysplasia or early mucosally limited cancer (intramucosal carcinoma, T1a). The assumption was that this strategy would diminish EAC-associated mortality. However, the benefit of this strategy has not been demonstrated by any clinical trial. Perhaps more telling is that although this targeted screening/surveillance practice has been widely utilized for many years, there has not been an appreciable improvement in EAC incidence or survival.

We will perform a comparative modeling exercise where each of the three CISNET models will analyze the effectiveness of the current EAC control strategy, which is depicted in the figure below including management corresponding to biologic/clinical health states.

In the first phase of the modeling, we will simulate and analyze a single birth cohort. The initial birth cohort will consist of individuals born in calendar year 1930, who were 45 years old when SEER data became accurately available (1975) and were 81 years old in 2011. In the second phase, we will perform analyses from a US population perspective, as this perspective is most relevant to inform cancer control interventions and policy. All US birth cohorts from 1890-1970 will be simulated and the results aggregated to produce population results. Additionally, we will extend the analyses for the entire US population into the future (2020 and 2030) to make projections regarding the impact of these regimens on future EAC incidence and mortality. We will assess current endoscopic screening, surveillance and treatment practices to determine their projected impact in the future.