Initial projections of the impact of tobacco control on lung cancer mortality from 1975-2000 highlighted the number of lung cancer deaths that were avoided due to the tobacco control efforts that did occur, and an upper bound on how many more deaths could have been avoided if the efforts had been perfect. The results of this comparative modeling project were published in the Journal of the National Cancer Institute (Moolgavkar, Holford et al. 2012), and also as a special monograph in the journal Risk Analysis (2012). In addition to the population-based models, this project resulted in the development of other sophisticated tools for the investigation of the association between smoking habits and human health. These included life tables for mortality associated with specific levels of smoking and a smoking history generator (SHG) (Jeon, Meza et al. 2012) that allows the stochastic simulation of individual smoking histories for the US birth cohorts from 1864-2012, while adjusting for smoking-related mortality.

We are extending this work to project the impact of tobacco control and lung cancer screening policies on current and future lung cancer rates in the US for the overall population, and also for different socio-demographic groups. We will also be extending our analyses to assess the effectiveness of tobacco control policies in middle-income countries (specifically Mexico, Thailand, and China).

Hypothesized impact of tobacco control policies on U.S. smoking prevalence. Percentage of smokers among the white U.S. male population in a given year (19002000) by given year at birth (different colors). Solid lines represent the percentage of smokers estimated based on National Health Interview Survey data. Dashed lines represent the percentages (hypothesized) that would have been observed if tobacco control efforts had never been initiated.(Adapted with permission from Moolgavkar, Holford et al. 2012)

Impact of Tobacco Control on Lung cancer death rates and counts for men and women aged 30-84 years as observed and for modeled tobacco control scenarios. 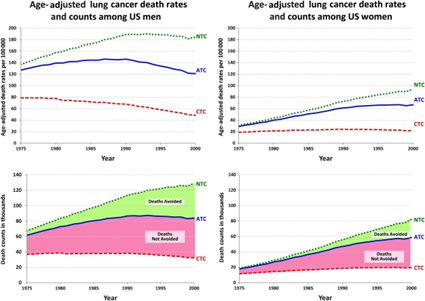 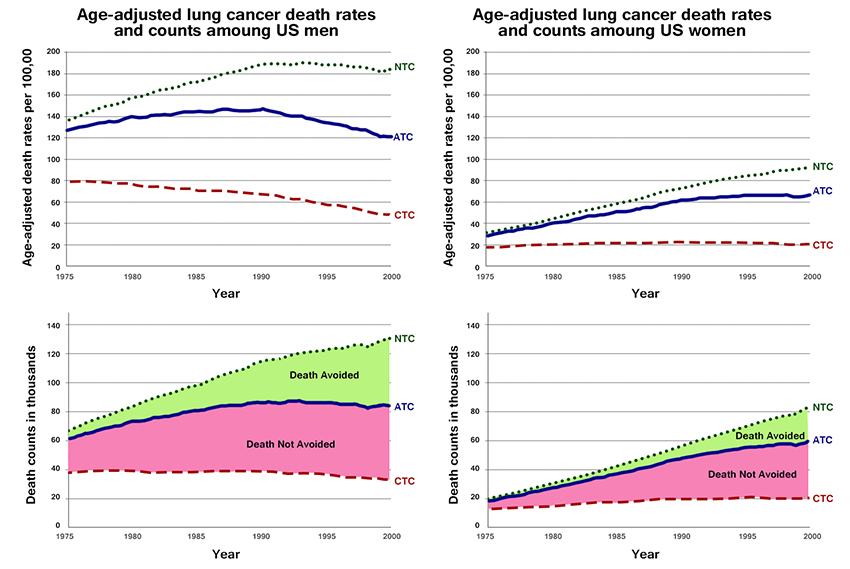 Five CISNET groups have been engaged in a comparative modeling analysis that aims to predict the impact of low-dose computed tomography (CT) screening on US lung cancer incidence, mortality, and overdiagnosis. The National Lung Screening Trial (NLST) found a significant lung cancer mortality reduction in its CT screening arm in comparison with its chest-radiography (CXR) screening arm, demonstrating that screening heavy smokers with low-dose CT can be effective in the early detection of lung cancer. Meanwhile, the Prostate Lung Colorectal and Ovarian Cancer Screening Trial (PLCO) found no statistically significant difference in lung cancer mortality between a no-screen control arm and a CXR screening arm.

We collaborated with the NLST investigators and with the US Preventive Services Task Force (USPSTF) to calibrate our models to the NLST and PLCO trials (Meza, ten Haaf et al. 2014) and then extrapolate the trial results to the US population (McMahon, Meza et al. 2014; de Koning, Meza et al. 2014). Using our NLST and PLCO-calibrated models, we estimated the population benefits and harms of lung cancer screening in the US, evaluating the relative effectiveness of 576 alternative screening scenarios. In particular, we explored varying the screening age eligibility range (starting at ages 45, 50 or 55 and stopping at ages 75, 80 or 85), the smoking exposure criteria (a minimum of 10, 20, 30 or 40 pack-years) and the time since quit for smokers (a maximum of 10, 15, 20 or 25 years). Clinical concerns about the potential for increased operative mortality in older individuals with a history of heavy smoking, as well as increased comorbidity and reduced eligibility for surgery with curative intent at higher age limits, led us to focus on scenarios with stopping ages of 80 years or younger.

We are extending this work to assess the potential of risk-based screening strategies (i.e., screening eligibility based on the probability of developing lung cancer within a few years rather than based only on past smoking history), and the cost-effectiveness of different screening strategies in the US. We will also be extending our models and analyses to assess the effectiveness of screening in middle-income countries (specifically Mexico, Thailand, and China).