Reconciling the effects of screening in the ERSPC and PLCO trials

Some 20 years after PSA screening began in the U.S., two large randomized trials published apparently conflicting results: The European Randomized Study of Screening for Prostate Cancer (ERSPC) found that screening reduced prostate cancer mortality, but the Prostate, Lung, Colorectal, and Ovarian Cancer Screening Trial (PLCO) found no reduction. Interpreting the results is complicated by differences in their implementation. Compared to the ERSPC, the PLCO involved a shorter interval between screens, a higher PSA threshold for biopsy referral, less frequent biopsy, and more frequent screening in the control group. In collaboration with investigators from both trials, we investigated differences between trials using two approaches. First, we estimated aggregate effects of screening on incidence in each arm of each trial in terms of a mean lead time. Then we analyzed whether the association between the risk of prostate cancer death and the mean lead time differed between trials. Finding no evidence of a different association, we concluded that the trials provide compatible evidence that screening reduces prostate cancer mortality (Tsodikov et al., 2017). Second, we applied screening efficacy estimated using ERSPC data to simulated trials with systematically varied settings for known differences in trial implementation, including screening intervals, PSA thresholds, biopsy receipt, and control arm contamination. We concluded that trial results are sensitive to implementation, and differences in biopsy frequency and control arm contamination were major contributors to the apparent differences in published results for the two trials (de Koning et al., 2018).

Healthy men and their primary care physicians must choose between conflicting clinical guidelines. 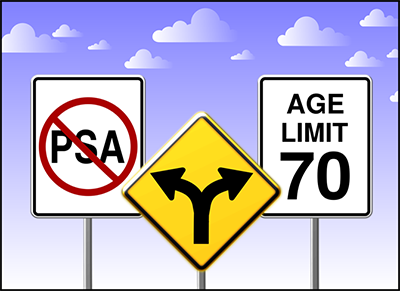 Some U.S. clinical guidelines recommend against routine PSA screening while others recommend shared decision-making for healthy men, typically up to age 70 years.

Prostate cancer death rates have declined by nearly one-half since the early 1990s. Many assume that PSA screening, which became popular in the early 1990s, is responsible for this drop in prostate cancer deaths. However, treatment for prostate cancer has also been changing. In the 1980s, radical prostatectomy increased in prominence, while, during the 1990s, hormonal therapies, previously reserved for advanced disease, were added to treatment regimens for localized tumors. Three models were used to quantify the fraction of the mortality decline attributable to changes in initial treatment. The models projected that changes in treatment explained 22% to 33% of the mortality decline by 2005. By isolating and quantifying the effects on mortality of treatment changes, we were able to more clearly quantify the likely role of PSA screening in the population setting (Etzioni et al., 2012).

The prostate section of the Prostate, Lung, Colorectal, and Ovarian (PLCO) cancer screening trial found a non-significant increase in prostate cancer mortality in the intervention arm compared to the control arm. However, 45% of participants reported receiving at least one prior PSA test before entering the trial, control arm participants continued to receive PSA tests at a higher frequency than the general population, and prostate cancer mortality was lower than expected in both arms. Three models were applied to study the effects of pre-trial and control arm screening on the published mortality rate ratio. The models found that under a clinically significant mortality reduction associated with PSA screening similar to that observed in the ERSPC trial, pre-trial and control arm screening substantially reduced the power of the PLCO to detect a mortality difference between arms and lead to a nontrivial chance of finding excess mortality in the intervention arm (Gulati et al., 2012).

Informed decisions about PSA screening for prostate cancer and about treatment following detection by screening require information about disease natural history, including the chances that the cancer has been overdiagnosed or that the cancer would lead to death if untreated. We leveraged three models to summarize key events in the development and progression of prostate cancer and to project risks of clinical progression and disease-specific deaths for PSA-detected cancers in the absence of treatment. The models projected that the lifetime risk of developing a preclinical prostate tumor is 20%-33% (range across models), that 38%-50% of these tumors would be diagnosed in the absence of screening and that 12%-25% would lead to death in the absence of treatment. Risks of overdiagnosis, metastasis, and prostate cancer death depended on age, Gleason grade, and PSA at diagnosis (Gulati et al., 2011).

Lead time and overdiagnosis are unobservable quantities that are key to evaluating the trade-offs between the potential benefits and harms of PSA screening. Previous studies, including two studies by CISNET prostate investigators (Tsodikov et al., 2006; Etzioni et al., 2002), published mean lead time estimates that ranged from 3 to 7 years and overdiagnosis estimates that ranged from 25% to 84% of all screen-detected cases. These prior estimates were highly disparate because they were developed under differing systems of practice of PSA use (e.g., PSA cutoffs and biopsy practices), different populations, as well as different assumptions and definitions of lead time and overdiagnosis. CISNET investigators recognized this opportunity to bring order to this disparate literature by developing estimates using U.S. practice patterns and a consistent set of definitions. By standardizing in this manner, three CISNET modeling groups were able to reduce the range of mean lead times to 5-7 years and overdiagnosis frequencies to 23%42% (Draisma et al., 2009). The two major randomized trials of prostate cancer screening (PLCO and ERSPC) use considerably different screening protocols, including PSA thresholds for biopsy and biopsy practices, and produced apparently conflicting results about the benefit of PSA screening. This CISNET prostate working group is working with investigators from both trials to reconcile differences in their circumstances of implementation and to assist in translating estimates of both benefit and harm to inform public health guidelines for the use of PSA screening.

Extent to which PSA screening reaches the reservoir of latent prostate cancer based on overdiagnosis estimates of 29% and lifetime estimates of latent disease of 36% (Etzioni et al., 1998).